In the San Joaquin Valley, located in the heart of central California, the nutrient-rich soil from which some of the nation’s agricultural products are derived also happens to be home to the largest petroleum-producing region in the state. These vastly different industries converge in the South Belridge Field just outside of Bakersfield, where the sight of cattle grazing between wells can be seen.

It is here that one company transformed their steam injection metering and data acquisition systems into a highly sophisticated, automated process comprised of a large network of WirelessHART transmitters and industrial broadband radios. 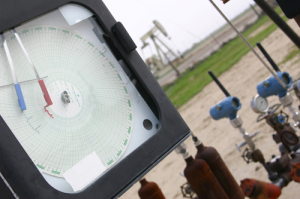 The company’s lease consists of over 200 wells distributed over a little more than a square mile. As an enhanced oil recovery project, continuous steam injectors play a critical role in the amount of oil produced by a given well. Placed adjacent to each producing well, steam is injected into the surrounding reservoir to help mobilize the oil toward the producing well.

Originally, each injector was fitted with a chart recorder, which metered and recorded steam. To track these readings, operators were required to visit each of the approximate 120 injection wells every day to visually interpret the chart recorders’ graphical readings, log it on a clipboard, manually convert this measure to a flow rate, key it into a spreadsheet, and send it to the office in Bakersfield, where a data-entry clerk keyed the figures into a database.

This steam metering method was very manpower-intensive. The chart recorders themselves required recalibration every three months, and it was difficult to accurately interpret their readings. Secondly, concerns existed about data integrity from potential recording errors during the several handoffs and manual entry steps required. Lastly, the process consumed much of the operators’ time and provided only one data point per day, so should a problem arise at a well, the company suffered response lag times in dealing with the issues.

The company’s Project Facilities Engineer saw these inefficiencies as another opportunity to improve processes. After equipment investigation, analysis, and discussion with operations, he was able to implement a new wireless metering and monitoring system, employing the latest technologies to deliver a real-time system, which resulted in substantial benefits to the company. The opportunity to implement a wireless solution made deployment quick and economical. Without these technologies, separate power and communication lines would be run to each well, making the retrofit project very costly and time-consuming. Additionally, maintenance of the system without the miles of power and communication lines was eliminated.

With close coordination with operations personnel, the new, state-of-the-art automation system began as a pilot project, during which ten Rosemount 3051S WirelessHART Pressure Transmitters were installed at four wells. Two transmitters were placed on each well to measure the downstream pressure at the wellhead and the upstream pressure before the steam passes through a choke. On dual-stream wells, a third transmitter is installed so that each stream has its own downstream transmitter and a shared upstream transmitter. The pressure transmitters communicated through the self-organizing mesh network to the Emerson WirelessHART gateway, where the process variables, process diagnostics, and instrument diagnostics were converted to Modbus® TCP/IP data. ProSoft Technology 802.11 industrial radios connected gateways in the field to an industrial PC in the office a mile away, forming the backhaul network, or an alternate wireless communication system that moves data from points in the field to the business system.

During the pilot project, the end user brought in a company that tests steam levels and is able to report a true number for the amount of steam being injected to a well. They compared the steam test results for both the wireless transmitters and the chart recorders and found the transmitters’ readings to be around ten times more accurate on average.

“We were surprised by how much more accurate of a reading this new technology was able to deliver,” said the end user’s Project Facilities Engineer. From a reservoir perspective, inaccurate steam metering translates into expensive repairs. Over-injecting of steam also leads to higher-than-necessary operating costs. Under-injection results in missed production opportunities where oil that could have been extracted is instead left in the ground.

After the project was validated, and with relative ease, the plan was rolled out across approximately 120 wells. In total, 249 Rosemount WirelessHART transmitters were installed, with four gateways aggregating this data and three ProSoft Technology industrial radios communicating this data to an industrial PC in the field office. From there, data is sent to the company’s intranet, where it is tied into two ProGauge Technologies custom-designed Web-based software packages. One enables operators to log in and view well data, print reports, and view alarms. The other is a statistical analysis tool with historical data, designed to provide a higher-level look at the field for trending. It provides a visual overlay of the well sites, enabling reservoir and production engineers to view data by clicking on a well, or they can see trend data, calculate steam to oil ratios (SORs), and more.

A .csv file is generated daily and imported into the end user’s reporting database, from which allocations are determined and distributed to various internal and external entities.

As a whole the project went very smoothly and quickly.

The biggest attribute of this system is that it allows operators to see performance problems more quickly and react with better priority and increased time efficiency.

In enhanced oil extraction projects, steam costs can account for anywhere from 40-65 percent of a producer's costs and are responsible for much of the revenue derived from a well. As a result of the newly automated wireless process and data acquisition system, the end user expects to see oil production increase, in addition to the benefits of greater efficiencies and reduced costs. The savings will more than pay for the entire system within the first couple months of operation, and the benefits will be seen year after year. The operation will benefit from:

Reduced maintenance
Calibration cycles for the Rosemount WirelessHART transmitters, which were delivered pre-calibrated, are recommended by Emerson only once every 5 years - a dramatic improvement from the 3-month cycle suggested for the chart recorders.

Real-time data: improved response times and smarter decision-making
Live data feeds to the field office, where operators can monitor present well status or query a range of conditions. Predetermined set points trigger notifications for operators to see instantaneously if a well deviates from goals. Data is archived permanently and can be trended for better analysis and decision-making down the road.

Increased efficiencies
The new system gives operators the data they need to better prioritize their day as soon as they arrive on site rather than visiting all 120 wells, not really knowing where to start. This frees them to focus on more productive activities.

Profitability stemming from greater accuracy and distribution of resources
At the time of installation, the cost of steam at the lease exceeded $10 million annually, and with the new system in place, the end user can distribute their steam with improved accuracy compared to the chart recorders.

This lease is a significant asset of the end user’s in the Central Valley, and their long-term goal is to continually improve their operations with solutions such as this. The company noted it will be reviewing where deployment of this technology can benefit their other operations.