No matter which direction you look in Gainesville, Texas, you see the same thing: rolling hills, grassy prairie dotted with cattle, and oil wells. The city is located in Cooke County, just 70 miles north of Dallas, where 82 percent of the county’s income comes from cattle. This makes it an environmentally sensitive area for oil companies. 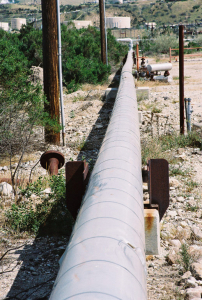 A while back, an oil field there began experiencing interference in its 150 MHz licensed-frequency radio network. The end user contacted Jeff Walters of Automation Alternatives in Weatherford, Texas, to see if he could diagnose the problem. Using a spectrum analyzer, Walters quickly found that the radios were experiencing elevated noise zones from power-grid interference, which caused the system to overload and shut down spontaneously.

“The radios were simply unable to differentiate between their own network traffic and the interfering radio signals around it,” Walters said.

There were other concerns facing Walters in his search for an upgraded system. Since the field was located in an environmentally sensitive area, it needed to be monitored 24 hours a day. Should there be an alarm condition, the SCADA system needed the capability to automatically shut down all or parts of the field.

Walters’ solution incorporated an interesting and effective blend of technology. Both Schneider Electric® and Rockwell Automation® PLCs receive analog and discrete data from the field. The data is then transmitted wirelessly using 22 ProSoft Technology serial radios. Since the radio network is inherently able to accommodate multiple protocols simultaneously, transmitting both Modbus and DF1 protocols presents no problem.

National Instruments Lookout was chosen as the SCADA system, allowing facilities to be polled every five minutes. Tank levels, line pressures, LACT readings, and a variety of discrete alarms trigger call-outs 24 hours a day. Because much of the oil field has trees and deep creek beds, chloride sensors are also monitored for possible spills.

“The new wireless system has eliminated a number of expenses for the end user,” said the ProSoft Regional Sales Manager who worked on the application. “Our radios are 2.4 GHz license-free, which saves the expense associated with licensed radios. The wireless system also allows an operator to monitor the field 24 hours a day from a central location, saving on employee overtime.”

ProSoft Technology’s 2.4 GHz radios experience no interference or downtime, making this wireless solution very reliable. As the oil field’s radio network grows, more radios can easily be added to the network and can continue to accommodate multiple protocols.