We tend to think about it only when disturbances occur, but wastewater treatment is a basic public service that affects all of us: it is vital to keep our living environment hygienic and healthy and our watercourses clean. Behind the scene, the wastewater treatment process combines microbiology and chemistry with mechanical engineering, instrumentation and automation techniques that offer high performance in a progressive way.

The central wastewater treatment plant of Lapuan Jätevesi Oy, a Finish company located in Lapua, west of Finland, receives household wastewater but also industrial wastewater from different locations: Atria, Lapuan Nahka, Kation and Metso Power, among others. “Around 60% of the water treated here is industrial wastewater,” Operating Chief of the plant, Vesa Hahtokari, says. Treatment of sewage including animal waste is especially laborious. “Compared to industrial sewage, we consider household wastewater to be clean enough to be used as a drink,” Hahtokari jokes. That is to say how important the automation of the whole system has to be considered with care.

The process starts with the primary treatment where the influent sewage water is strained to remove all large objects and the oxygen level of the water is increased to facilitate microbe activities (microbes clean the water by feeding on its impurities). During this biological treatment phase, the microbes in the wastewater are given suitable growing conditions in terms of temperature, oxygen level and nutrition.

The next phase includes chemical secondary sedimentation, where aluminum-based chemicals are added to the water from the biological treatment to prompt flocculation of slowly-degrading organic and other materials. In the last phase, the remaining sludge is treated by removing water from it. The water separated from the sludge is taken back to the beginning of the treatment process, and the solid sludge is taken to the Lakeuden Etappi biogas plant. 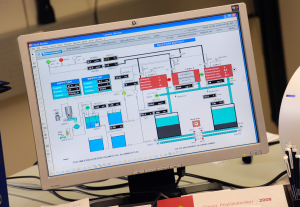 The whole system was renewed in 2008 in collaboration with Schneider Electric and Seinäjoen Teollisuussähkö Ky. “The old automation system had served its time. We have been using it every day for the past 16 years,” Hahtokari explains. The original automation system involved six controllers from the TSX7 series, with Monitor 77/2 software environment, and used MAPWAY communication protocol. In the new solution, six Modicon Premium controllers are implemented with Monitor Pro v7.6 and are using Modbus TCP/IP over wireless, using nine of ProSoft Technology’s RadioLinx industrial Ethernet radios. About 2000 process variables are transiting over the wireless network which is also used for programming and maintenance purposes.

A total of seven locations had to be integrated into one single tight network. The 6 Modicon Premium controllers are located in different buildings on the wastewater treatment plant, and the plant has two control rooms. “We put the second computer here in this higher building so that our feet never get wet,” Hahtokari muses. The plant is situated in an area prone to flooding (its electrical centre had to be refurbished last year after flood damage). Of course, the plant can continue to operate even if the computers are down.

From the user point of view, the first advantage of the wireless networking option was the cost and time savings for the installation: no need to dig trenches, no need to clean up existing cable paths. 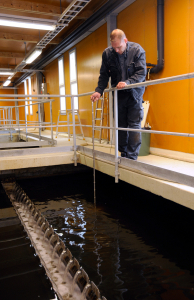 From the integrator point of view, RadioLinx network was “the easiest part of the implementation. We didn’t have any problem. These radios are very easy to configure and mounting recommendations given by ProSoft Technology were very clear. Schneider Electric made some tests in their office and then explained us how to implement the wireless network on the field.”

From Schneider Electric point of view, the engineering of the network was reduced to a minimum. “When we started the project, we did not locally have any specific RF expertise,” explains Jouni Aarnu, Application Sales and Key Account Manager, Wood and BioEnergy, at Schneider Electric Finland. “We talked to ProSoft Technology Technical Support Engineers and provided them with the basic engineering and layout of the network. They made some calculations that where necessary for this type of application and they provided us with the recommended lists of accessories for each radio location: cables, antenna, lightning protector, etc. They also provided all the necessary recommendations for mounting and implementation in the field. Only one radio had small problem during installation due to an antenna alignment issue, and that was very quickly fixed with the remote support of ProSoft Technology’s engineers.” Aarnu concludes, “The wireless network implementation was an easy job for us and our integrator. We learned from this first project with ProSoft Technology.”

“The controls have been defined largely in the same way as in the old system,” Hahtokari explains. “Some of the old controls have remained the same, some have been added and we have changed the commands a little bit.” Since 1992, the plant has acquired a new sludge drying centrifuge and the treatment process has been modified by a new chemical treatment with aluminum. The automation system had to evolve accordingly.

“No controller can remain the same forever. There are always some additions and changes along the way. In this industry in particular, the regulations change quite a lot over the years as well,” Sales Manager Jukka Kiiltomäki from Schneider Electric says. Kiiltomäki took part in the original automation project of Lapuan Jätevesi Oy in 1992 as well with Seinäjoen Teollisuussähkö. “We have not had any problems with the implementation of the new automation system. The graphics of the user interface have remained practically the same so we are familiar with the screens and don’t need additional training,” Hahtokari summarises.

The reporting program in use is separate from the SCADA, but it reads data directly from the Modicon Premium controllers as well, via the same network. “It would be possible to integrate reporting together with SCADA software, but we wanted to keep reporting on a separate program and a separate computer at the time because the database is so large. In connection with the automation renewal project, we updated the reporting software as well,” Kiiltomäki says.

In the future, the controllers can be easily modified or complemented when necessary with additional input or output modules. On the network side, the wireless option provides an additional degree of flexibility.