Failure is not an option for flood barrier’s control system 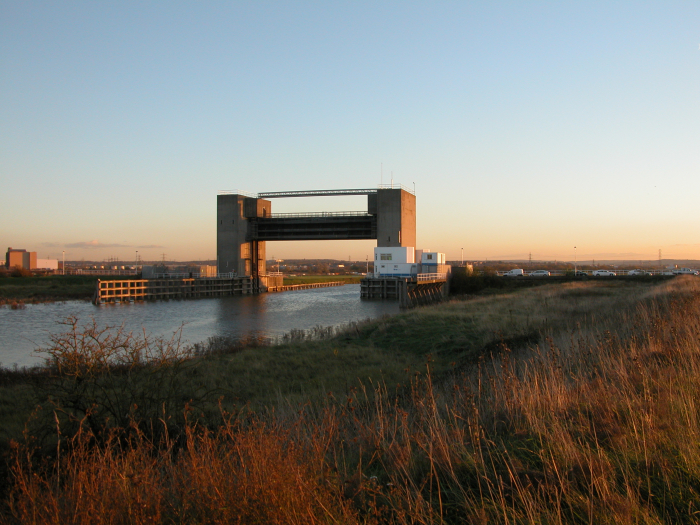 Failure is not an option for flood barrier’s control system

Failure is not an option when upgrading a flood barrier’s control system. Should a flood barrier malfunction, thousands of homes and businesses could be severely impacted.

Upgrading a flood barrier isn’t a task that can be done overnight. It takes months and months of work. The barrier has to remain available for use throughout the upgrade, making it a considered and careful task. There has to be several fail-safe measures and redundancies in place. Whoever said redundancies are a bad thing hasn’t taken a look at a flood barrier system.

Two concrete towers stand 20 meters above the ground on either side of the mouth of Dartford Creek. This is the UK Environment Agency’s Dartford Barrier Flood Defence System in Kent, England. The barrier is routinely closed, in conjunction with the bigger Thames Barrier upstream, to prevent high tide water levels in the River Thames Estuary flowing back up the creek and flooding Dartford and the surrounding area.

Two steel gates, each 30 meters across and weighing over 160 tons, are suspended at a high level between the two concrete towers. Like a huge guillotine at the creek mouth, one gate may be slowly lowered on its supporting chains onto the river bed to block the flow of water. Then the second gate may be slowly lowered to rest onto the top of the first gate. When closed together, the steel gates can withstand up to 10.4 meters of water.

The gates are raised and lowered by direct drive oil hydraulic motors. The drive system comprises two 18.5kW pump and motor units, providing both duty and standby facilities, enabling a gate to be raised or lowered in 15 minutes. When not in use, both gate structures are safely held in the fully raised position and latched using hydraulic latch mechanisms. This permits vessels to pass underneath the gates along the creek.

It is envisaged that due to climate change that the barrier may need to operate an average of 50 times per annum over the next 25 years.

“The system has to be highly available with many fallback systems in case of failures,” said Andrew Garwood, a Senior Contracts Manager in the Controls Division of Qualter Hall & Co Limited, Barnsley.

Qualter Hall provided the M&E contracted works on behalf of the principal contractor Birse Civils, which had engaged Qualter Hall as the system integrator for the project and as the mechanical and electrical engineering contractor in charge of upgrading the control system. They had several goals in mind. Number one was safety and reliability. Flooding, should it occur, could cause extensive damage to the surrounding area.

Two Rockwell Automation ControlLogix® redundant PACs are inside each of the 20-meter towers to control the opening and closing of the barrier, but much of the equipment the control system spoke to was PROFIBUS or Siemens®-based. Two PROFIBUS Master communication modules from ProSoft Technology were installed inside the ControlLogix PACs to facilitate communication from the processors.

Fiber optic cables were installed between the two towers as part of the control system overhaul. While the cable links were being constructed, ProSoft Technology’s Industrial Hotspot radios served as the communication link.

“The wireless link was then used as an automatic fallback connection should fiber optic connection be lost. The ProSoft Technology equipment was selected for its flexibility and support of the spanning tree protocol,” Mr. Garwood said.

ProSoft Technology’s solutions helped ease the engineering work by making it possible for the ControlLogix system to communicate as one single protocol.

Thousands of homes and businesses are now safely protected.